The leftist destruction of UCLA 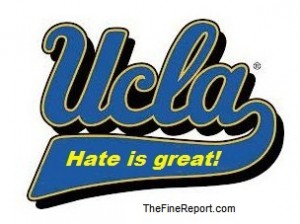 The professor of science who blew the whistle on vast eco-fraud in California government and the fraudulent teaching credentials of ‘eco-instructors’ at UCLA sues for his job after being fired in retaliation:

The importance of his work on behalf of Californians cannot be understated.

The Environmental Health Sciences professor has been fighting the false science behind some of our state’s most onerous regulations for years.  The rebel professor is also famously known for bringing the public’s attention to a fake Ph.D. degree claimed by a researcher for the extremely powerful state environmental agency, the California Air Resources Board (CARB).

Leftist institutions claim they adore whistle-blowers.  Not, it seems, when they fight the eco-activism that is entrenched in campus and government bureaucracies.   Shortly after I met him in 2010, UCLA told Enstrom he was being terminated because his research failed to accord with the department’s “mission.”

Subsequently, Enstrom turned to the Foundation for Individual Rights in Education (FIRE) for assistance in keeping his job. Now, the organization is helping him bring a lawsuit against the University of California.

The American Center for Law and Justice (ACLJ) also took up Enstrom’s case and is representing Enstrom in a lawsuit filed late yesterday in Los Angeles federal court against UCLA officials and the University of California Regents. Enstrom is seeking a declaration that UCLA violated Enstrom’s free speech and due process rights, as well as an injunction requiring UCLA to rehire him.

“Because of Enstrom’s research and his whistleblowing against prominent advocates of environmental regulation in California, UCLA seemingly has decided to silence him any way it can,” said FIRE Vice President of Programs Adam Kissel. “If there is anywhere we need honest scientists who aren’t on a mission to exclude whistleblowers and skeptics, it is the American university.”

Enstrom is hoping Californians in the area can show up to the courthouse in support of his suit to keep his job. The hearing details are:

The lawsuit filing provides a troubling description of how fraud was used to impose draconian environmental regulations on California enterprises, which is one of the many reasons why California is deemed by CEOs nationwide as the “worst place to do business”.