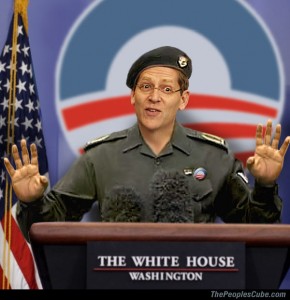 – Carney told reporters in April that the president had never argued the Buffett Rule would solve the country’s deficit problems. But when the Buffett Rule was first introduced in September, President Obama claimed the tax would “stabilize our debt and deficits for the next decade.”

– Following a report that Hilary B. Rosen, the Democratic consultant who said Ann Romney had “never actually worked a day in her life,” had visited the Obama White House 35 times, Carney told reporters he personally knew three people named “Hilary Rosen.” Rosen herself said she was the only Hilary Rosen she had met before.

– Carney also battled this month with Fox News reporter Ed Henry and CBS News reporter Norah O’Donnell after he claimed the president had not said it would be an “unprecedented” step for the Supreme Court to overturn Obamacare:

ED HENRY: In his original comments he did not draw out that caveat. He just said the whole thing would be unprecedented.

JAY CARNEY: That’s not what he said, Ed, and that’s certainly not what he meant. It was clear to most folks who observe this and understand is at issue here.

NORAH O’DONNELL: Jay, that’s not true. The president said on Monday: “It would an unprecedented, extraordinary step of overturning a law that was passed by a strong majority of a democratically elected Congress.” It took him until yesterday to talk about the commerce clause and on an economic issue—there are two instances in the past 80 years where the precedent, where the Supreme Court has overturned stuff—U.S. vs. Lopez and U.S. vs. Morrison. These are very specific legal issues. It’s not evident to everybody.

CARNEY: Well, it may not be evident to you. It is clear that the president was talking about matters like this that involve the commerce clause.

‘Baghdad Jay promised he wouldn’t come in my — ‘

‘But he did.  And the check didn’t come in the mail, either.’