Boehner’s idea to withhold pay from lawmakers is  unconstitutional:

The 27th amendment states no law changing compensation for members of the House or the Senate can take effect until after the next House election. That means a law, even if it were to clear the Democratic-controlled Senate, which is a long shot, could not be used to withhold pay for almost two years.

If you’re a leftist, who needs *Cloward-Piven, when you’ve got this guy working for you? 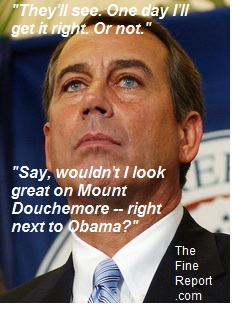 If we don’t dump this guy now, the Democrats will take the House in 2014 — and give Barack Obama a monopoly of power.