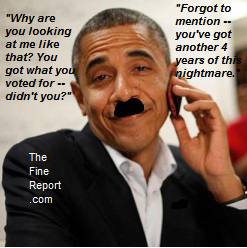 1. “Hey, at least that successful Mormon businessman didn’t win.” 2. “Didn’t your lady parts warn you this would happen?” 3. “Look at the bright side, gay marriage passed in four states.” 4. “Hey, Big Bird still has a job. Isn’t that the important thing?” 5. “I am sure Obama cares deeply about your situation. … Read more

In 2009, Igor Panarin lectured at the Diplomatic Academy of the Russian Foreign Ministry School, where he stated that he believes that the US will begin to collapse in 2010. Panarin, dean of the school, also predicted that President Obama would announce martial law by the end of 2012 http://www.acus.org/new_atlanticist/usa-done-2010-russian-diplomatic-academy-dean   He was wrong … Read more