A question on the blog LegalInsurrection.com pondered that f the @#$% hits the fan and President Fudd is finally seen for what he is by most Americans, will the GOP be able to move in and fill the leadership void that will be left? The answer, of course, is no, not the bozos now in charge. But the writer’s explain why was worth posting:

I don’t agree with this premise. Once again, as in many critiques of Obama or even political commentary today, it misses the incredibly unique or pseudomorphic nature of this man and administration and instead uses a conventional and historical model of politics to judge him.

Obama is ahead of schedule as it relates to his goals. Obamacare, the stimulus, the expansion of the regulatory state (and of the state itself), the mideast meltdowns. His was an extraordinary first term not only in its discrete accomplishments but in the changes to our government and our relationship to it, and to how America is seen in the world. I would also say that the progress he’s made in just a few short months to vitiate the 2nd Amendment is pretty extraordinary.

In addition, Obama does not intend to use the conventional, that is to say Constitutional, means of operating a presidency in this term. When we talk about second terms and presidential goals we are using a context of passing legislation. This is part of Obama’s plan, but an increasingly smaller part. Obama intends simply to do what he wishes to do through the vast powers of the presidency irrespective of Congress. This is where his alliance with the media will pay huge dividends, even more so than in his first term.

Also, when we talk about what is on “the GOP’s side” we are speaking in a kind of unreal language. How can that which doesn’t really exist as a definitive form anymore in relation to other forms have a “side.”

Time will pass, but Obama is not competing with it, really. He has plenty of time to finish what he started.

No, we cannot count on the likes of this backstabbing putz — for anything: 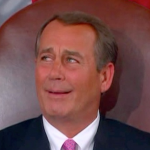